It's been a while since I posted. A long while. I have been re-evaluating the work I do with the Fish Bomb Boats. In 2015 I had a very successful exhibition at the Fort Worth Community Art Center. In some ways I feel that show was the terminus of the Fish Bomb Boats as they currently manifested.

I have moved on to work more with the Fish Bomb Boats in virtual reality which will give me a way to manifest them in a digital realm so that others who can view them can visit them in an environment where they actually 'fly.' To this end I have been working for the last 2 years in Unity 3D, Next Engine 3D scanner and Autodesk Maya to digitize, manifest and put them in a virtual game gallery. I have placed the games on my website and they are still fairly crude.

Due to lack of funding and academic interest this project has been stalled somewhat and I do continue to work on it albeit at a snails pace.http://www.stacyelko.com/interactive.html

I have moved on to a truly great project, finally making connections outside of the art world with a doctor in speech pathology who works with aphasia survivors. We have teamed up with a game theorist and are beginning to develop an ap prototype that will interactively educate aphasia survivors about the nature of their condition and what they can expect with their life. It is very motivating and I hope I survive in this world long enough to see it manifested.

I did rethink the Fish Bomb Boats and began a new series of them, very small and focused on a smaller mythos rather than the world I had created. They reference Baba Yaga in her many fascinating manifestations as witch and protectress of the environment. I've attached a few of them here. Thank you. 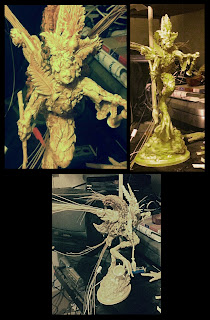 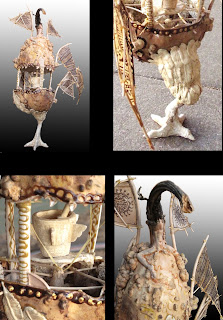